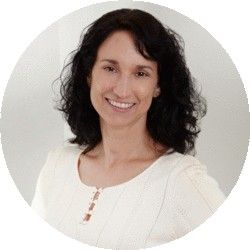 Physical Therapist at Upper East Side

Ginny graduated from New York University in 1988 with a Bachelor’s degree in Physical Therapy. Since becoming a physical therapy Ginny has worked in a multitude of patient populations including pediatrics, sports medicine, orthopedics and neurological disorders. She has worked on both the east and west coast and ran her own practice from 2006-2014. Ginny’s work combines a strong focus on manual therapy, postural re-education and core strengthening. Her hands on techniques include, muscle energy technique, myofascial release/ soft tissue mobilization, and craniosacral therapy. Ginny blends the movement philosophies of the Pilates, the Feldenkrais method, and Tai Chi in her approach to re-educate functional movement. Utilizing all of these practices, GInny can better treat injuries in a whole body approach by addressing and facilitating different interconnect systems of the body. In her spare time, Ginny loves to cook, workout and be out in nature with her husband and son. Ginny also teaches 1:1 Pilates Reformer sessions at the Midtown location (44th & 3rd Ave)

In our continuing efforts to ensure the safety and well-being of our patients and staff during the COVID-19 pandemic, we are pleased to announce that we have launched a new integrated patient intake system that not only allows you to electronically complete and sign all necessary paperwork, but also to schedule and manage your appointments online.  This secure, easy to use tool is HIPAA compliant and available to you 24/7 using your personal computer or tablet.  In addition to the health benefit of reduced time interacting with front desk staff, with online scheduling you have the ability with a few clicks to:

ALL of our offices are OPEN and ALL of our specialties (Vestibular, Hand and Pelvic Health) are available!